From Left to Write: The Cartographer of No Man's Land by P.S. Duffy 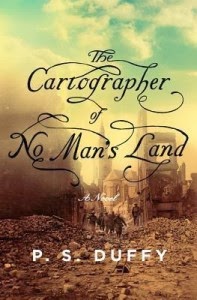 This book feels quite timely considering Veteran's/Remembrance Day was just a few days ago. I normally don't consider myself a lucky or fortunate person considering the present state of my existence, but I know in one way I am. I have never had a close friend or family member die in the line of duty. In fact, no one I'm close to has even gone to war while I was alive.

My maternal grandpa was in WWII but that was obviously well before I was alive. I think he was a cook or something. He's missing a few of his fingers but that was actually an on the job accident not related to the service. No one really talks about his time in the military but from what I understand he was never hurt or anything.

I have a cousin who is in the National Guard but I don't think he's ever been deployed. I have a step-cousin who is in the Marines (I think) and I don't really know what her situation is. Josh's brother was in the Navy but according to him, "he was just hanging out on carriers and stuff". My sister almost joined the Air Force during an off period with her on-and-off husband but she didn't, thank god. A few friends have husbands in the military but as far as I know none of them have left the states. Thinking about it I'm surprised I don't know more people who are/were in the military, since there are two bases in my county.

I am thankful I've never had to wait with bated breath for a letter from a loved one. I've never worried about someone showing up at my door with bad news. I've never seen a casualty report on the news and wondered if my friend or family member was okay. I've never had someone go missing. I never have to go months without seeing my husband. In this I am lucky.

This post was inspired by The Cartographer of No Man's Land: A Novel

by P.S. Duffy. Angus enlists in the Nova Scotia WWI regiment and travels Europe to search for his missing in action best friend and brother-in-law. Along the way Angus discovers more than he ever wanted to know.Join From Left to Write on November 14 as we discuss The Cartographer of No Man’s Land. As a member, I received a copy of the book for review purposes.
Posted by Frozen OJ Posted at 4:55 AM

Email ThisBlogThis!Share to TwitterShare to FacebookShare to Pinterest
Labels: Book, From Left to Write